Revisiting Hornsby to CBD in 25mins


This blog in October 2015 proposed linking up the upper North Shore line stations (north of Killara) to Sydney Metro Northwest (which has tunnels running underneath Lindfield just 2km from Killara and needed to be shutdown in 2018-2019 anyway for Metro refurbishment).  This would have enabled Hornsby to CBD services in 25 minutes as well as providing additional capacity for the upper North Shore line (being the equivalent of quadruplicating tracks between Chatswood and Gordon by making better use of unused tunnels). 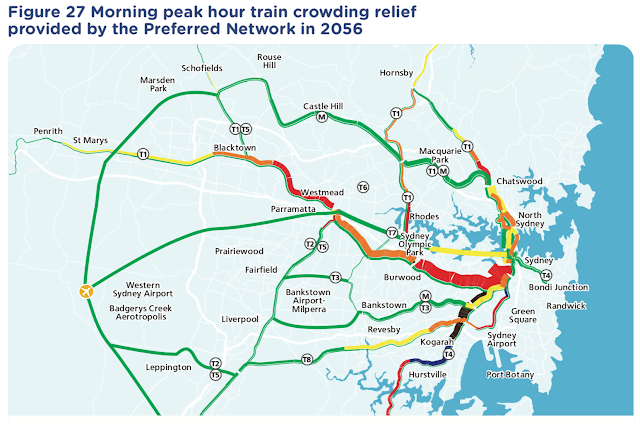 My previous posts on Sydney Metro West (November 2016) highlighted how Parramatta station in the coming decades will be as busy as Wynyard is today.  The conclusion drawn from my post in November 2016 was that the current Parramatta station will be primarily a destination station (like Wynard/Town Hall today, with 4-6 platforms), and could not serve an interchange function (like Central is today, with approximately 20 platforms).  This seems pretty basic and self obvious, as Parramatta station is only 4 platforms with limited stairs/lift capacity, and it would be expensive and disruptive to upgrade it into 20 odd platforms like Central today.

Six months after my post, Parramatta city council has released a transport study.  The link to this study is at:

This study was commissioned by the local government council but used the TfNSW Strategic Transport Model (STM).  It is full of reams of new data but of particular relevance is Action 10.2 on page 33, which states the following:


Action 10.2: Consider the need for, and plan for a second railway station in the CBD in order to offer additional travel options from broader areas to the CBD and address future level of demand. Current forecasts indicate similar station demand to Wynyard by 2036; there is a need to decentralise demand and de- congest the Parramatta Transport Interchange

Much has been written about the multi-industry disruption arising from the entry of US technology giants into phones, music, automobiles, advertising, publishing and retail.  Now also add secretly funding the Aussie housing "bubble" to that list.

As revealed in a speech by Aussie central banker Guy Debelle, the cash rich US tech giants have been tapped by major Aussie banks (Westpac, CBA, ANZ, NAB) to replace the funding Aussie banks lost following the withdrawal of funding by US money market mutual funds.  A central bank research paper by Susan Black et al provides further detail on the quantum of this funding - as shown in graph 10, nearly $70 billion of Aussie bank funding has been pulled out by money market funds, but Aussie banks have nearly entirely replaced this funding with cash from giant US companies. 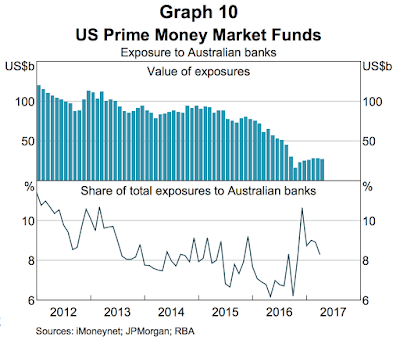 The West Metro to Parramatta has been announced as the preferred next metro line, with stations confirmed for Parramatta, Olympic Park, White Bay and Sydney CBD.  Other stations are to be considered but have not been mentioned.

For the announced scope (ie: terminating in Parramatta), the biggest question in my opinion is how to fill up the announced 40K/hr capacity without hitting bottlenecks elsewhere in the "old" rail system.  To see how big 40K is, have a look at the left bar chart below (source = TfNSW). 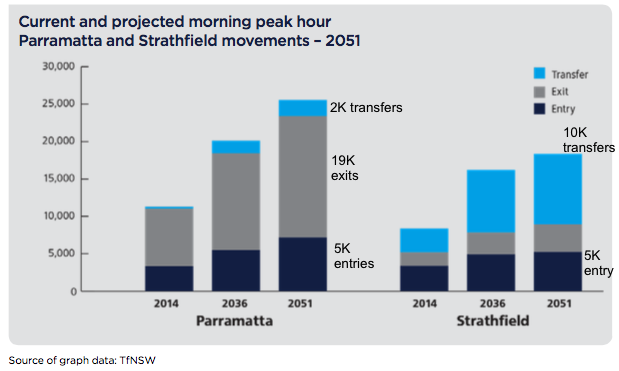 The first part looked at one proposal to replace the Parramatta light rail line with a metro.

However, the Parramatta to Olympic corridor, at over 1600 hectares of potential renewal lands, in the geographic heart of Greater Sydney, could easily support both a light rail line and a metro, as shown in the catchment map below (blue circles = light rail stations, purple circles = metro stations).  The metro would have stations at Silverwater and at Pippita as the key intermediate stops between Parramatta and Strathfield.

Note that Olympic Park is not an intermediate stop for the metro, as it actually has very limited value capture opportunities - sufficient for light rail but not for heavy rail... more on this later - first what needs to be explained is the concept of a "continuous walkup catchment". 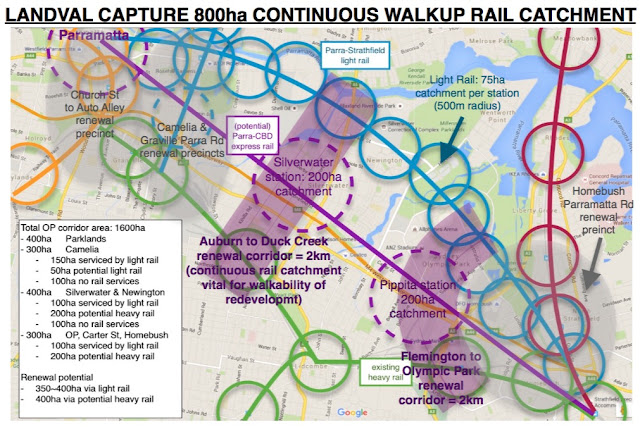 The SMH has an "exclusive" story on Sydney West Metro, but was light on detail, apart from speculating it could replace parts of the Parramatta to Strathfield light rail network.

Below is one proposal that gives more "inside" detail on how one proposed West Metro line would work (effectively directly replacing the proposed Parramatta light rail to Strathfield).  This proposal has gone through a few iterations over the past few months, possibly due to feedback given to the private consortium by TfNSW.  The drawings below were taken from the February 2016 iteration, but there have been some subsequent refinements (such as an extension to Maroubra and deletion of the station at North Strathfield).

It is definitely pleasing to see the involvement of land owners and property companies becoming involved in transport planning.  The old "transport first" approach relies too much on Government capital grants and operational subsidies to be viable - as user fares cover only a minority of operating costs - let alone funding capital costs.  The result is that many worthwhile transport projects can't be funded.  It also results in lack of integration between stations and surrounding retail/commercial uses (resulting in dark, poor lit, inactive stations outside of peak hours).  In contrast, land owner led transport planning can create stations with better pedestrian access and more retail and commercial activation and allows the matching of funding with more intensive land use.

However, one controversy is whether this West Metro proposal would undermine the business case for a light rail line also.   Part 2 of this thread will demonstrate this is not the case by looking into an alternative metro alignment which will allow light rail and metro to co-exist in the same corridor (but with complementary value capture catchments).

Note: images below are an iconic interpretation of the West Metro Link only.

For actual maps sourced from the WestLink private consortium,

go to City of Parramatta website at this link:
http://www.cityofparramatta.com.au/wp-content/uploads/2016/03/John-Kinsella-Billbergia.pdf 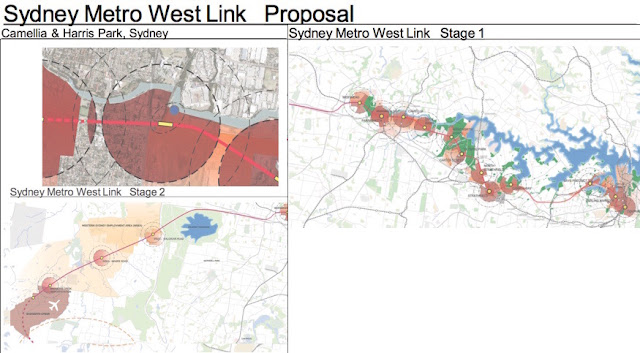 The Sydney Metro EIS was released today at (majorprojects.planning.nsw.gov.au)

More analysis to come in future but a quick note to highlight that the T1 Northbound line (Platform 16 at Central Station) will become dual faced.  This has critical importance to improving the efficiency of the Western line by allowing passengers to alight from both sides of the train doors, potentially halving dwell time at Central. 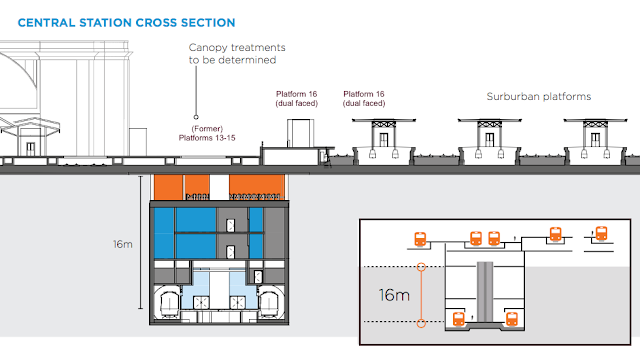 This was a prediction that was made in November....